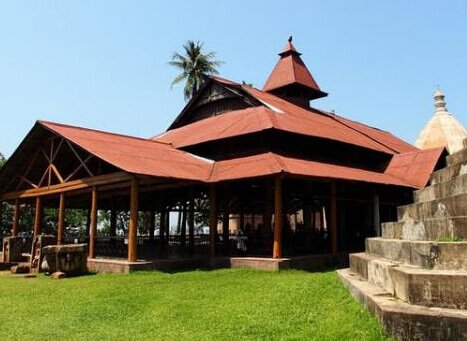 This is a famous Hayagriva temple situated in Assam, the North Eastern state of India. This historic temple is quite old. However, its archaic structure got demolished due to the ravages of time and other reasons, and a new building was put up in its place by Raghudeva Narayana, the Koch king in the 16th century CE. This temple is dedicated to Hayagriva, the horse-faced Avatar of Lord Vishnu. The term ‘Madhava’ here refers to another name for Vishnu.

Mythology has an interesting account to share about the advent of Hayagriva. Once, 2 Asuras, Madhu, and Kaitabha stole the Vedas from Brahma, the Creator. Vedas are sacred texts regarded as the treasure trove of ancient wisdom, and it is essential for Brahma to have them for performing his critical function of the creation of the universe and its beings. Thus, severely handicapped by the loss of the Vedas, the God of creation rushed to his own creator, Vishnu, seeking his help to retrieve the Vedas so that he could continue to discharge his responsibility and aid the worlds to thrive and prosper.

Being a compassionate and responsive divinity, Vishnu, the God of protection and sustenance, decided immediately to solve Brahma’s predicament. It is then that he took the form of a unique being with the head of a horse and the body of a human being. The Sanskrit word ‘Haya’ refers to the horse, and ‘Griva’ denotes the neck. Thus, this Vishnu incarnation came to be called Hayagriva, the horse-headed Lord. Moreover, as he sported a horse face, he is also called ‘Hayavadhana,’ the horse-faced divinity. As per a few accounts, the demons Madhu and Kaitabha were in the form of horses, and that was the reason Vishnu, too, assumed this form to challenge and destroy them.

The powerful Hayagriva reached the nether world where the demons had hidden the Vedas, fought a fierce battle with the mighty demons, slew them, took possession of the Vedas, and restored them intact to Brahma, much to his relief and joy. The grateful creator offered his worship to Hayagriva and resumed his activity of creation.
Hayagriva thus remains the rescuer of immense knowledge and divine wisdom, as represented by the Vedas. Hence, Hayagriva rightly remains the God of Knowledge and Wisdom. He is also considered the Guru of Saraswati, the Goddess of Learning.

This Hayagriva temple is located on the Manikoota hill at Hajo, at about 30 kms West of Guwahati, in Assam. Kamakhya temple, perhaps the most famous temple of Assam, is also near this place of worship.

The temple edifice, a modest building, is made up of 3 parts, the basement, central portion, and Shikara, the superstructure. The basement is the ‘Garbhagraha,’ the sanctum sanctorum of the temple, where the image of the principal deity, Hayagriva, is installed and worshiped. This portion of the structure, about 14 square feet in area, is built of different types of bricks. The central portion contains the shrine, while the topmost part of the superstructure continues upwards as a spire, and ends at an apex point, right at the top. 2 stone screens designed in the shape of lotuses found placed on both sides of the anteroom provide ventilation to the inner space. The exterior walls of the upper portion of the temple contain many large figures engraved on them. Some of these represent the 10 famous Avatars of Vishnu, of which Buddha remains as the 9th divine incarnation. Other figures carved there seem to denote some mysterious or mythological characters, with many of them carrying tridents in their hands.

This Hayagriva temple also holds significance to Buddhists, some of whom believe that Bhagavan Buddha left his mortal coil only at this place and attained Nirvana, the salvation. Hence it remains a holy center of pilgrimage for Buddhist Lamas.

People can visit this temple, pray to Hayagriva, and receive his divine blessings for knowledge, skills, wisdom, wealth, prosperity, and peace.

What to Do After a Hit & Run Accident in Woodland Hills

Ordering Trophies and Medals in Bulk

3 Methods to Become a Truck Dispatcher

Why is Purattasi month considered so sacred?

What to Do After a Hit & Run Accident in Woodland Hills

What is an Automated Bidding Algorithm? – Outorigin

How to Find Purchasing data can be a valuable Doctors Database